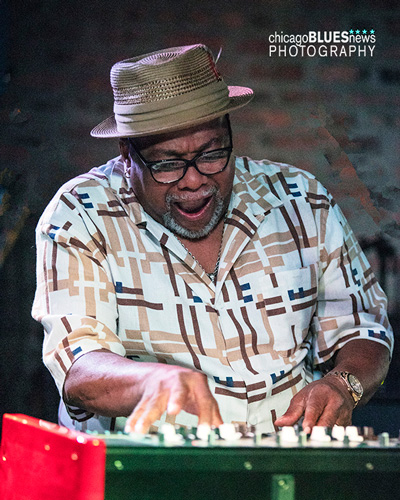 Ronnie Hicks has been a highly respected mainstay of the Chicago’s blues scene for many years as a producer, keyboard player and member of the respected Masheen Company Band.

Ronnie was born in Alabama but moved to Chicago when he was only a few days old and has remained in the city ever since. His father was a skilled piano player who used to play the juke joints in Alabama. Ronnie grew up around entertainer, with likes of Muddy Waters visiting his aunt’s house and groups such as the Artistics and the Chi-Lites coming to the family house for picnics, and to sing for the neighborhood and family crowds.

Ronnie started out by singing in a vocal group called the Soul Majestics when he was fifteen and showed a strong interest in playing the keyboards from an early age. He later formed the Masheen Company Band with Kenny Hampton and Lester Holmes. Ronnie and Masheen Company played with Chicagoan Artie “Blues Boy” White for about 10 years and appeared on his Ichiban CDs. Masheen Company constantly developed, and by the seventies they were a nine piece band including four brass players. They backed up the Chi-Lites, Chick Rogers, Z. Z. Hill, Little Milton, Albert King, Ruby Andrews, Cicero Blake, Bobby “Blue” Bland amongst many others and played at such prestigious venues including the Regal Theatre. Ronnie was also Cicero Blake’s bandleader and toured, opening shows for such groups as the Ohio Players, Kool and The Gang, and the Emotions.

Ronnie regards himself as the conductor of the band, as well as being the band’s keyboard player. Masheen Company, although reduced in size these days, still continues to be a first call band for Chicago acts in need of class musicians. As a producer Ronnie works with some rap, jazz, and gospel artists as well. He supports other Chicago musicians and singers recently on their live shows such as J.W. Williams, Demetria Taylor, Nellie “Tiger” Travis, Mike Wheeler and Walter Scott of the famed Scott Brothers.

The “All for You” CD, on the Jam Baby Label, is Ronnie’s latest musical tracks arranged and produced by him. The songs performed at the live shows are warmly received. Don’t be surprised if you drop in at Buddy Guy’s Legends in Chicago, and see Ronnie and Masheen Company bringing the crowd to their feet!

Apart from the aforementioned hiatus in music, Ronnie throughout his musical career been a full time musician and produce, being highly respected by his peers, which are feats he should be rightly proud of.