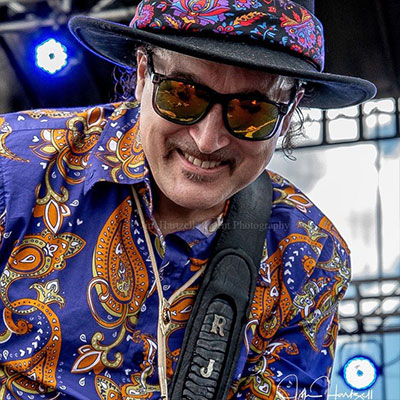 Fire branded in the Chicago blues circuit, roots rocker and bluesman RJ Howson picked up his skillful guitar chops performing and sharing the stage with blues icons and fellow musicians at Buddy Guy’s Legends, Rosa's Lounge, Kingston Mines, BLUES on Halstead and many other clubs in the Windy City and playing countless shows all over the midwest. RJ continues to be steeped in the southern stews since moving to Florida with openers for Butch Trucks & the Freight Train Band, Dickey Betts & Great Southern, the Atlanta Rhythm Section, Molly Hatchet, Buddy Guy and a host of legendary musicians.

Having played music since being a child, RJ has played everything from Chicago Blues to Funk, Soul, Rock, Gospel, Country, Salsa and World Music. "My goal is to use music to show that the roots of all people are the same and to play it forward while paying tribute to the past and my mentors".

Some of my key stylistic heroes are Albert King, Otis Rush, BB King, Buddy Guy, Eric Clapton, Stevie Ray Vaughan, Lonnie Mack, Jimi Hendrix, Dickey Betts, Duane Allman and many others. Since moving to Florida, RJ has been blessed with encouragement from a new friendships with Dickey Betts & Great Southern, Damon Fowler, Berry Duane Oakley, and many other great Florida based musicians. "I love to speak with the strings and believe the tone is in the fingers."

He grew up as the son of a Vietnam Veteran/Musician and a farmer's daughter/poet and travelled the world as a child and teen giving him a wide view of the world. Having been blessed with the gift of music as the common thread throughout his life, RJ moved to Chicago and made friends with many Chicago Blues Legends and up and coming musicians. It was a challenging road to say the least, but also quite magical and has been a very rewarding journey leading RJ back to the heart of who he is as a Musician, Guitarist, Singer, Songwriter, and band leader.

Since relocating to Florida, he has been busy playing a steady stream of shows at Festivals, Theaters, and Clubs all over Florida including performances at the Giving Hunger the Blues Festival 2015 & 2016 (main headliner with 20 bands), the Camping with the Blues Festival 2015 and 2016, Suncoast Blues Festival 2015, Bradenton Blues Festival 2015, Thunder By the Bay festival 2012 (20,00 people in attendance), Atlanta Rhythm Section opener at the Englewood Event Center 2016 the Allman Brother guitarist Dan Toler Benefit with Dickey Betts headlining, Jannus Landing, the Save the Gulf Festival, the Rock the Park festival, BLUESAPALOOZA, Cottee River Seafood and Blues Festival (see below for an list). Catch RJ Live at one of his many shows !!!