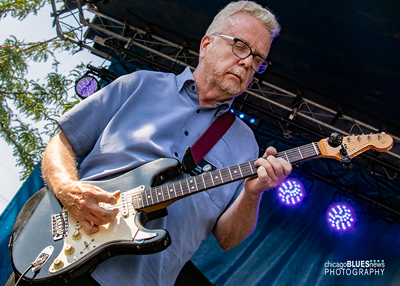 From the first time he heard them, Kreher has been deeply into the blues. That love for the music as a young man even prompted him to blaze a trail that only a few others besides him were willing to travel – to venues on the south and west sides of the Windy City. One-time member of Muddy Water's band – Rick “Junior” Kreher, had been playing the guitar and gigging around Chicago for a long time before hooking up with Muddy in what turned out to be the Rock-N-Roll Hall of Famer's last real working band, playing with him right up until his death in 1983 (Kreher was a pallbearer at the legend’s funeral service).

"Muddy recruited me and John Primer (guitar) and Earnest Johnson (bass) and Lovie Lee (piano) and Ray Allison (drums),” recalls Kreher "and we ended up being his last band,” Kreher played with practically everyone who is anyone over the ensuing years, including Little Arthur Duncan, Taildragger, Studebaker John, Willie Buck, Rockin' Johnny and Muddy's son – Mud Morganfield – to name just a few. And while they're all different, Kreher says there is one common thread between the diverse set of bluesmen that he plays with; a common thread that makes his job much easier. “Even though they're all different, they're all Chicago blues musicians and I play the Chicago blues,” he said.