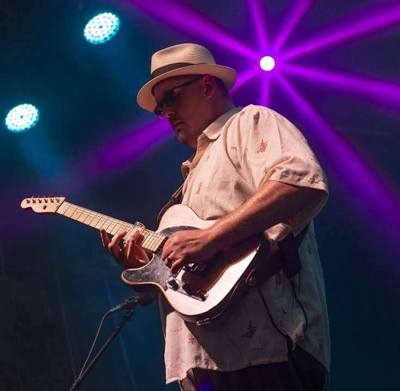 For close to two decades, Marty “Big Dog” Mercer's heartfelt, southpaw Blues and soulful voice have growled through the Midwest music scene and abroad. Mercer's ability to combine emotional lyrics that tell stories of life and his aggressive guitar style and his slide guitar abilities makes him an artist unlike any other.

The 6'10”, 300 lb man owns every stage he walks on and his personality is as large as his stature.

Performing close to 150 shows every year, he and his band have captured the attention of fans and critics alike. "I perform as a trio, four and five-piece band," Mercer says. "The trio consists of guitar, bass, and drums. To fill out the sound for larger rooms and stages we add horns, saxophone and or trombone. At the heart of this organization, we are a Blues-Rock band."

“This is THE BAND for all those that have ever said “I don't care for Blues music” Seeing the “Big Dog” Mercer band once is enough to convert them into instant fans of his style of Chicago Blues & Rock. Having fun on stage and engaging the audience with humorous banter and having them participate in sing-alongs is what they do. Nothing quite like hearing a large crowd of people barking and howling like dogs...” - Bass-Schuler Entertainment