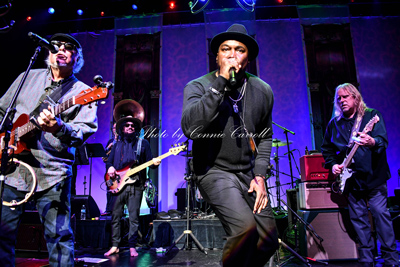 Joseph Morganfield was born April 14, 1964 into blues royalty. He is the youngest son of the World Famous Muddy Waters with all the mojo that comes with it. So it isn't hard to imagine Joseph beginning his career by following in his fathers footsteps. Literally.

As a young boy Joseph would travel and preform with his father. Growing up with the blues all around him, learning guitar from his father Muddy Waters, and his fathers guitarist Bob Margolin. However, having won a basketball scholarship while studying communications at the University of Northern Iowa, Joseph put music temporarily behind him in favor of playing collage basketball.

Joseph has reimerged, however, taking up his music once again in clubs and many other festivals around Chicago and the United States. Mojo Morganfield, as he is sometimes called now, is planing to preform in Europe soon.

Joseph 'Mojo' Morgainfield preformed on stage with Grammy Award Winners -Don Was, Jamey Johnson, and Warren Haynes at The Chicago Theater at The Last Waltz. He has also performed with his brother Big Bill Morganfield at the Chicago Blues Fest. In 2019 Mojo Opened for Bad Company featuring Paul Rogers, he also preformed on stage at the Chicago Blues Festival with his Band The Mannish Boyz.

Joseph is an ambassador, supporter, and promoter inductee in the prestigious Chicago Blues Hall of Fame. He continues to perform and attends many public events on behalf of his father Muddy Waters, keeping their name and the blues legacy alive.