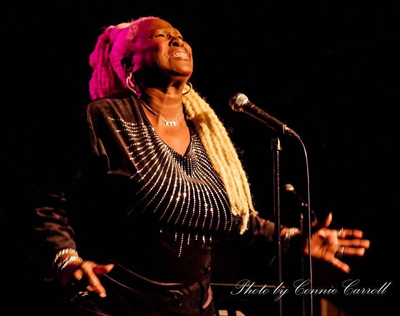 Holle Thee Maxwell was born on October 17, 1945 as HolleThee MarClaRoDe' Maxwell. She recorded singles under the name “Holly Maxwell” in the 1960s-1970s for the record labels Constellation, (Curtis Mayfield’s) Curtom Records, Smit-Whit, and Star. Her songs “Only When You’re Lonely”, “One Thin Dime”, “Never Love Again”, “Suffer”, and “Philly Barracuda” were regional hits across the country. Today, her singles are sought by collectors across the world, especially in Europe where they call her sound “Northern Soul”.

Holle Thee sang her first song professionally at the age of 5, studied classical voice and piano at the age of 9, and graduated with degrees from both The Chicago Musical College at Roosevelt University and The Julliard School in New York City.

Holle is an accomplished songwriter as well as an incredible singer. Blues superstar, Bobby “Blue” Bland covered one of her songs on his critically acclaimed album Come Fly With Me.

In addition to singing soul, rock, jazz, country and blues, Holle also sings in French, German and Italian. From opera, to “Thee” blues (as she likes to call it), Holle Thee Maxwell can sing it all in a way that is distinctly “Holle”.

Holle’s performances will not disappoint. After her performance at the Chicago Blues Festival in 2009 blew people away, Time Out Chicago stated: “Would you expect any less from a lady who once danced on tables at a high-school cafeteria to promote her latest record?”