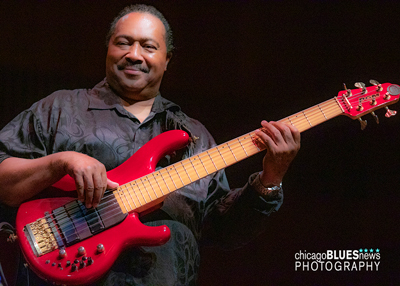 When jazz legend Miles Davis returned to the music scene after a five-year absence, the first bassist he called was Felton Crews. It’s easy to see why, because few can match Felton’s ability to create imaginative, free, open and melodic bass lines. Felton grew up in Chicago, a city steeped in musical history, and which exposed the bassist to many forms of musical genres including, blues, jazz, pop, rock, R&B, funk and soul. The result is a highly versatile musician, with the ability to provide the right bass line for whatever music he’s playing, whether it’s a furious funk groove or a slow blues riff.

Felton’s first professional gig came when he was still in high school, where he was asked to support singer Minnie Ripperton. After playing numerous professional gigs around Chicago, Felton was one of a group of young musicians asked to help Miles record his comeback album, The Man with the Horn. Felton played on two tracks, including the hit single “Shout,” which features a powerful bass groove created by Felton.

In 1986, Felton was invited to join Miles’ touring band, which resulted in him playing in gigs across the world including, the US, Europe and South America. The band – whose guitarists included Mike Stern and Robben Ford - played at a number of prestigious events including, The New Orleans Jazz Festival, The Montreux Jazz Festival and an Amnesty International concert, which was televised across the US.

The tour saw Felton sharing the stage with artists such as George Duke, David Sanborn, Hiram Bullock and Carolos Santana, and Felton’s playing is documented on releases such as the CD boxed set The Complete Miles Davis at Montreux and the DVD boxed set The Definitive Miles Davis at Montreux. Robert Irving III, Miles’ musical director for five years, says of Felton’s playing with Miles, “His fluidity was unmatched by any player that preceded him or succeeded him.”

Felton also believes in giving something back to music, and is an instructor for the Blues Kids Foundation, a program which provides musical education, instruction and camps for up-and-coming young musicians.

In 2010, Felton was honored with a Grammy nomination for his bass work on the widely acclaimed album, The Chicago Blues: A Living History.

Now, Felton is set to launch his eagerly awaited first solo CD album, a release that will surprise, delight and excite fans of Felton’s playing, as well as those hearing his sound for the first time.

For Felton, music has always been very special, as he puts it, “Music Is the nutrient of our souls; the pulse of our spirit. It’s the passport of our minds and the owner of our hearts. A world filled with love and creativity shall ring as one; a chord that resounds infinitely.”