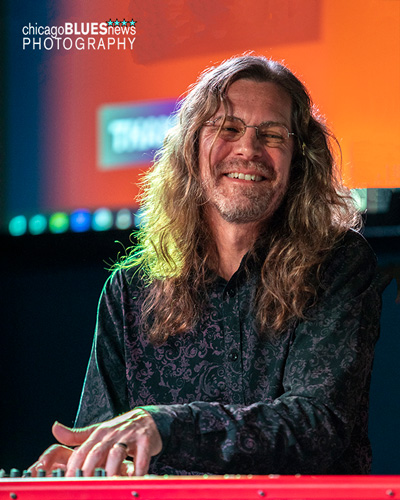 Brother John has been a resident musician at Buddy Guy’s Legends in Chicago for 30 years. He has played with Eric Clapton, Steve Miller, the Black Crowes, and acquired ringing endorsements from many other musicians of renown. For example: Led Zeppelin vocalist Robert Plant had seen John play with Otis Rush at the Jazz Café in London. When Plant and Kattke met in person at the United Center in Chicago, Plant told Kattke: “You play a mean guitar!” George Benson came to the jam session that Kattke hosts at Buddy Guy’s Legends in Chicago. After hearing the opening set that John played with his band, Benson told him: “You’re fearless! I thought I was fearless! You’re fearless!”

"In terms of the condition of full-time musicians in Chicago, “Brother” John Kattke is a privileged witness. For more than a quarter of a century he has scoured the clubs of the city, taking turns on guitar or keyboards, when he’s not directing studio horn arrangements or playing keyboards on some albums, such as the latest Toronzo Cannon release, “The Chicago Way.” Buddy Guy, Otis Rush, Matt Murphy, Junior Wells, he accompanied them all at a time or another.Clubs may not be as generous as the past in terms of earnings, their business has become more complicated, but the circuit is not dead, he assures. So you have to adapt, as it has always been more or less the case. As far as I am concerned, I’ll admit that I earn my living by playing with a dozen different groups or artists.” Rolling Stone, France

An intimate rendition of “When Things Go Wrong,” with only pianist John Kattke in supple support, is one of the best things the harpist [Junior Wells] has done in decades. Bill Dahl, Chicago Tribune, reviewing Junior Wells’s “Unidisputed Godfather of Blues” (GBW), Feb. 10, 1994

“It says that I played their grand piano at their theater, and sang the song ‘Everything’s Going To Be Allright,’ which they seemed to think was fitting, at their club,” John says. “Considering the number of musicians involved in this festival, I was somewhat impressed that they mentioned me twice in the article. Or maybe I just love Mexico and am psyched ’cause that’s the first time I’ve ever played there, and I hope to go back.” La Journada: El segundo día del 10 Festival de Blues devino puro gozo, festejos y palomazos(Review of a festival in Mexico that featured Brother John.)

Usually when Brother John’s band plays at Legends, it’s for the Monday night open-jam. But Tuesday (August) 1, they’ll be joined by a man who’s not only an authentic legend, but the cat who owns the club: Mr. Buddy Guy…. Seventy years young, he’ll be celebrating his birthday with a special guest set. Those who’ve caught his sold-out shows every January know enough to show up early for a good look. “TimeOut Chicago” July 27-August 3, 2006

John Kattke (a.k.a. Brother John) is one of the most talented and versatile musicians on the Chicago music scene today. Perfoming double duty on both guitar and keyboards, Brother John has been a vital musical component behind some of the blues’ most lauded musicians, including Buddy Guy, Otis Rush & Koko Taylor. As a solo artist his playing stands apart as a uniquely creative force of its own, and his vocals, an aspect of the music that is often overlooked in today’s guitar crazy world, are delivered with full-throated assurance. Brother John is definitely a Bluesman on the rise. Jason Blankenship,Buddy Guy’s Legends Bluesletter, Jan./Feb. 1998

Kattke has been a fixture at Buddy Guy’s Legends in Chicago, where his playing impressed the owner enough that Guy hired him to go on tour with him. Kattke was also the leader of the Otis Rush Band for three years. He auditioned to be the lead guitarist for the Black Crows, but then “they decided to do that tour with Jimmie Page,” Kattke said. Pioneer Press “Diversions,” Jan. 17, 2002